Immerse yourself in the creative wisdom of some of the leading preachers today! 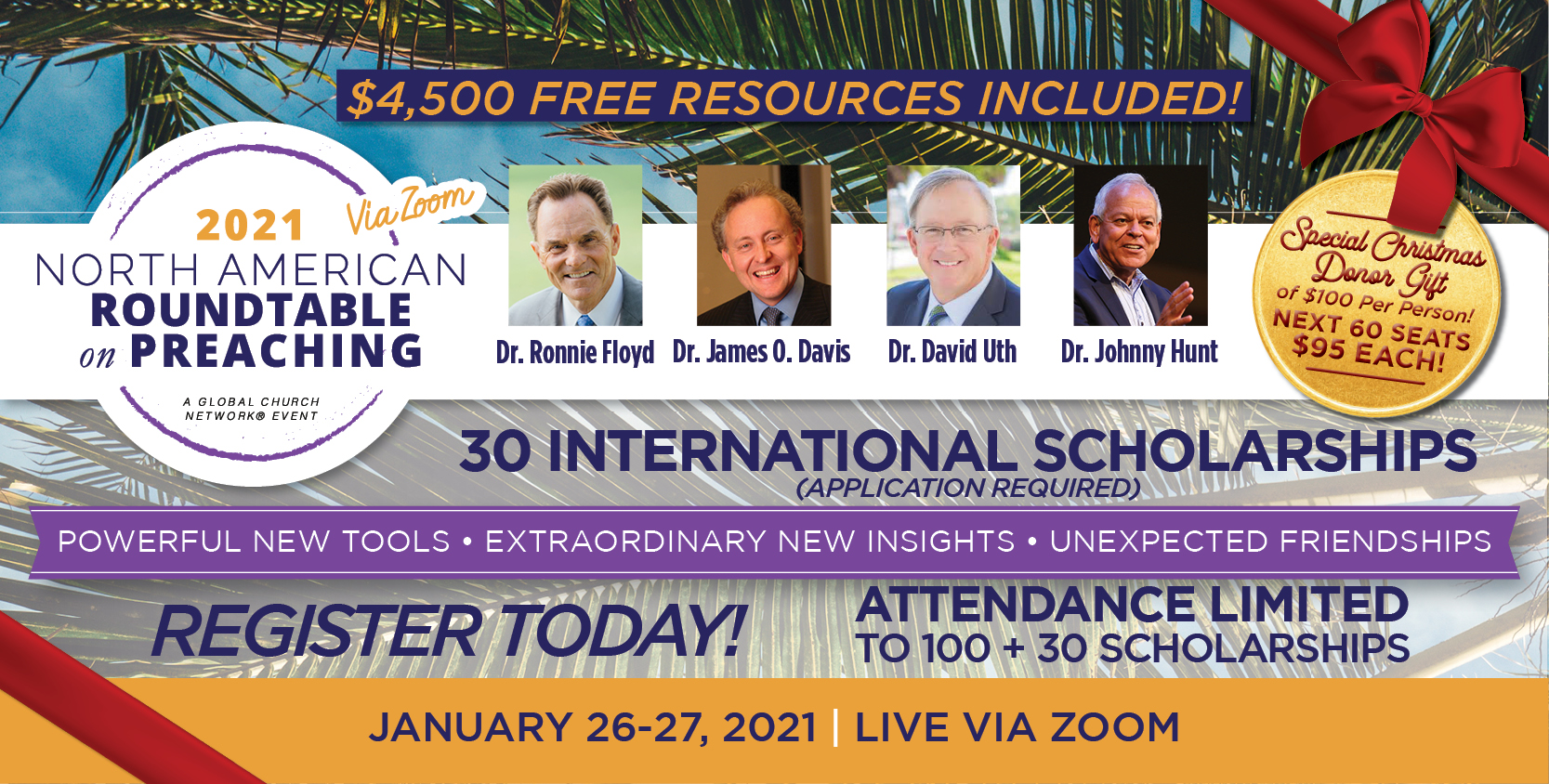 For 48 hours, immerse yourself in the creative wisdom of some of the leading preachers today with a spectacular group of pastors and ministers who live your dramas and share your dreams. Every week, you will be able minimize time, maximize quality and multiply results using practices to drive your message home to people of all generations for years to come.

Since its inception in 2009, hundreds of pastors and leaders have attended the North American Roundtable On Preaching. They have been encourage and equipped to fulfill their divine calling in ministry. The greatest investment leaders ever make is the investment in themselves!

The 2021 North American Roundtable on Preaching will convene only minutes from the Atlantic Ocean in sunny Melbourne, Florida, just east of Orlando. Only 80 registrations are available to ensure the rich and stimulating exchange of ideas among the most diverse gathering of Christian streams gathered anywhere.

We are called to fill the pulpit and God will fill the building. This is a roundtable for ministers who want to improve every week for the rest of their lives! Register Today!

Dr. David Uth is the Senior Pastor of one of the largest churches in the U.S., First Baptist Church Orlando, a multicultural congregation of over 14,000 in Orlando, Florida. First Baptist provides Spanish, Portuguese, and ASL translation to meet the needs of the Orlando community. One of the nation’s top biblical expositors, Dr. Uth believes that his primary responsibility is communicating vision to the body of Christ, and leading and teaching from God’s Word to accomplish that vision.

Dr. James O. Davis, president of the Global Church Network and Cutting Edge International, is considered to be the leading Christian networker of our time. The Global Church Network (formerly Billion Soul Network) has become the world’s largest pastors network, partnering with more than 2,400 ministries and 560,000 churches around the globe. A prolific author, international speaker, and expert on networking and leadership, Dr. Davis has ministered face-to-face to millions of people in more than 125 nations.

A former president of the Southern Baptist Convention, Dr. Johnny Hunt has been the pastor of First Baptist Church Woodstock since 1986. Over his tenure, the church has grown from about 1,000 to over 16,000 in attendance. He is well-known and well-loved for the passion and energy he brings to his preaching and mentoring ministries. He currently serves as the Senior Vice President of Evangelism and Leadership for the North American Mission Board.


Dr. Ronnie Floyd’s preaching and leadership have impacted tens of thousands of people around the world. For over 30 years, Dr. Floyd served as Senior Pastor of North American Mission Board, a multi-campus congregation of more than 16,000 in Northwest Arkansas. Under his leadership, Cross Church baptized over 18,000 persons. In June 2016, Dr. Floyd completed a two-year elected term as President of the Southern Baptist Convention. He is currently President/CEO of Southern Baptist Convention Executive Committee.

The North American Preaching Roundtable is designed for the curious, creative, passionate—for those who want to go beyond just “doing church” to embark on a Christian ministry adventure that could impact their entire community and the world.

This Roundtable provides a platform for like-minded ministers to connect with each other and start rewarding conversations around common interests.

At the Roundtable, you’ll meet people who have made heroic efforts to change their personal preaching style, their time management and their church culture to open a role for new ideas big enough to reach the community around them. Included in this powerful roundtable will be some of today’s most prolific sermonizers, most aggressive soul-winners and top missions contributors.

This historic gathering will not be just another roundtable on preaching or communication, but will help to raise the standard of your preaching for years to come.

We invite you and your organization to become part of a growing number of men and women worldwide who are joining forces to work together to help win the Second Billion. There are ONLY TWO sponsorships available for the 2021 North American Roundtable on Preaching. If your organization is interested in becoming one of the two to place yourself in front of these world-class leaders, contact Nichole Stevens immediately at nichole@billion.tv.

The Hilton Melbourne Florida has set aside a block of rooms for Preaching Roundtable attendees at the discounted rate of $119 per night. To ensure that you receive the reduced group rate, please use this dedicated link to make your reservation online. If you prefer to make your reservation by phone, please call Hilton Reservations Central at 1-800-445-8667, or call the hotel directly at 321-768-0200. To get the discounted rate, please give the reservations agent this group code: NARTP.

Feel free to arrive a day early and stay a day late! The group rate is available for the nights of Monday January 25 through Friday January 29, 2021. Since there are a limited number of group block rooms, please make your reservation as soon as possible.

Substitution / Cancellation Policy
We cannot refund registrations for this event; however, you may transfer any registration to another name. All unused conference registrations will be used for the mission of the Global Church, to help plant five million new churches for a billion soul harvest!